Retrofitting is updating or adding equipment, sensors, or services to existing hardware so that it is able to make use of new technologies. While many organizations would benefit from the ability to use monitoring, remote control, or other features from the Internet of Things (IoT), a lot of equipment already in the field is not capable of the necessary communications. Retrofitting allows this equipment to connect, report, or be managed.

Replacing old equipment with newer equipment that is ready for the latest technologies is always an option. However, in some cases doing so can be cost prohibitive, time consuming, or otherwise generally wasteful.

While certain equipment needs to be replaced on a regular basis, other industrial equipment can have a lifespan of many years or even decades. Replacing such equipment just to gain access to IoT or other features is wasteful and very often impractical. It also presents the problem of chasing technology. Equipment replaced today may still become outdated with regard to communications or other technologies. Replacing equipment company-wide today may provide access to current technologies, but will newer 5G technology render the entire effort meaningless?

Retrofitting allows for usable updates without the waste of replacement and upgrading to newer technology means new or additional retrofitting rather than another wholesale replacement of equipment.

A lot of equipment does communicate at least some data. Such data is often just an analog transmission from a microcontroller or programmable controller. Even if such information could be intercepted, it isn’t usable without being converted to modern digital communications. An analog-to-digital converter allows the existing data to be sent via a modern communication method such as Ethernet or Wi-Fi. Once that data can be communicated remotely, it can be monitored by a compatible monitoring system.

Often, the most difficult part of retrofitting is in the integration of new sensors. For equipment that does not communicate the necessary data, even in analog data, additional sensors are necessary. Sensors that were specifically designed for legacy equipment and that monitor the necessary data may not exist. However, there are numerous kinds of sensors that, with creative application, may allow almost anything to be monitored. Sensors that measure voltage or current can sense how hard or how efficiently something is working. Other standard sensors also provide useful data. These include heat sensors (is it overheating), vibration sensors (are there issues with bearings, fans, or mounting), audio sensors (clanging and banging are seldom good), and of course, moisture sensors (for detecting leaks or flooding).

Whether monitoring a single device in an equipment shed miles from the nearest city or one of thousands of pieces of machinery in a large factory, gathering data is worthless if the data cannot be used. An important part of retrofitting is gaining the ability to use the data gathered by the sensors, and in the case of controlling devices remotely, gaining the ability to receive the signal necessary to control the device.

These days, communication boils down to either wired or wireless communication. Wired communication is where the device is directly connected via cable to either an existing network, gateway, or other relay. Wireless communication is where devices that are close enough to an existing network use Wi-Fi connectivity, which provides reliable and fast communication allowing for real-time monitoring and control of devices. Where Wi-Fi is impractical, cellular communication also offers the type of speed that can support real-time monitoring and control, but often at a very high cost. For situations where neither option is feasible, low-power wide-area networks (LPWAN) offer large coverage areas, low costs, and limited battery requirements (but at the cost of slower and lower bandwidth connectivity). This solution generally means not having the ability to use either real-time monitoring or control and it may also limit the amount of data that can be communicated. 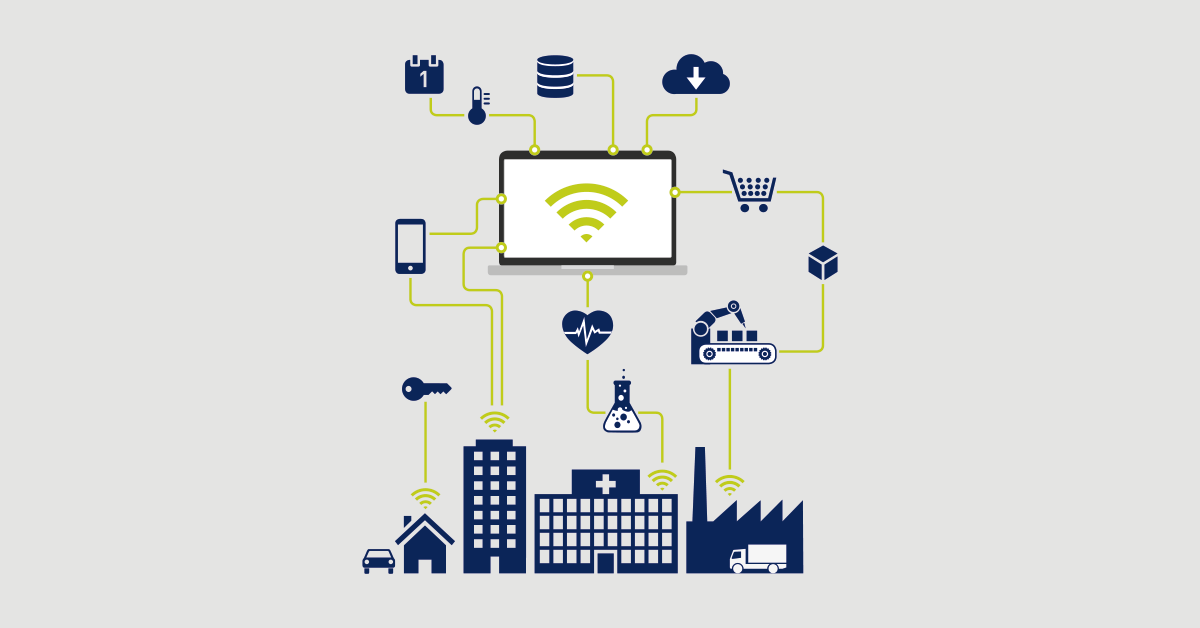 Some equipment was never designed to communicate at all. Be it irrigation pumps along a stream, lights, or sprinklers, it was not all that long ago that there was simply nothing for such equipment to feasibly communicate, and no one available to read the communication. These types of equipment require additional hardware so that IoT and other communications can be used. In some cases, it may be possible to connect new sensors that monitor existing mechanical processes or the voltage of electrical currents.

Likewise, equipment such as a sprinkler or pump that turns on and off does so because of some physical or electrical condition. A pump might turn on whenever water is present. Other equipment may use a preset timer. Processes like these could be reconfigured with modified equipment that would allow an operator at a remote console to turn something such as a pump or light on or off, or set something faster or slower, or whatever is necessary, all with the click of a mouse.

The easiest way to add new communication capabilities is for the manufacturer to provide a module or kit that can be attached to existing equipment. This scenario is most common for manufacturers that still make and support similar equipment. Offering the ability to monitor such equipment is a requirement for new devices. To encourage buyers to keep buying the same brand, offering upgrades for old equipment increases the “stickiness” of the installation. If you already have numerous ABC Air Conditioners installed and monitored, then it is likely that you will purchase new equipment from the same vendor so that you can continue to monitor in the same way that you already monitor older equipment. In this case, it is in everyone’s interest for the manufacturer to engineer and produce optional equipment that can be added to existing equipment.

In some cases, the original manufacturer has no incentive to produce the hardware necessary to create a digital connection to existing equipment. However, a third-party may choose to create such hardware. Often, a company that offers ongoing support or other services would choose to create the necessary hardware and then sell it or offer it as part of a service contract.

In one example, Bosch Rexroth, a third-party company that sells an IoT gateway, connected a lathe from 1887 to a sensor that monitored and recorded its speed. That data was forwarded back to a computer-based console that displayed the historical speed as a graph. In this case, there was no ability to control the lathe remotely, but you can easily imagine a similar type of lathe with its existing gearing being connected to a modern motor and controlled by a remote console.

In cases like these, the third-party often offers a selection of sensors that, with limited modification, can monitor common aspects of various kinds of equipment. These sensors then relay the data to a computerized monitoring system.

In the case where neither the manufacturer nor third-parties offer a usable solution, it may be necessary to build one yourself. Although the most difficult of the retrofitting solutions, it may be the only available option. Some engineers, a technical manual, and a lot of trial and error can turn an LED readout screen into digital data that can be monitored, collected, and transferred over Wi-Fi or LPWAN.

In some cases, equipment can be upgraded to digital communication via supplemental hardware rather than by upgrading the equipment itself. Many types of equipment are already capable of communicating or reporting digital data. These include a proprietary port on the back of a manufacturing press or an LED readout that displays information, for example. The problem is that they cannot communicate or report in a way that an organization can use. In cases like these, supplemental hardware can turn unusable, old-school communication into modern, digital signals.

Just because an old motor has no way to monitor its temperature does not mean the temperature cannot be monitored. An external, infrared heat sensor pointed at the motor core might give usable data that can be reported back to a management system.

One easy external sensor is a simple plug-in electricity monitor. Plug the monitor into the wall, plug the device into the monitor, and with no upgrade or additional sensors at all, you get a wealth of monitoring data. Increased electricity usage would indicate that the equipment is working harder than usual. If the electricity ever stops, you could assume that the equipment has shut down, all without doing a single bit of programming or a hardware upgrade.

Optical sensors could be placed to watch legacy equipment and report whether or not certain status lights are on, or if a light changes from red to green. Audio sensors can listen for warning bells or status chirps. All of these sensors report what they see or hear back to a central console via digital communications.

An external system can provide extended communications. That old monitoring port or token ring port can be plugged into a nearby computer, router, or cellular communications system. The old, reliable, “two-foot” communication distance takes the data to the newer, supplemental equipment, which then broadcasts it via a hard link, a Wi-Fi link, or even a radio signal.